David Benson joined Kensington Aldridge Academy as Principal Designate in September 2013, leading the academy through its pre-opening phase to become its first Principal on opening.

In his previous role David was Vice Principal in charge of Teaching and Learning, Assessment and Curriculum at Ark Academy in Brent. 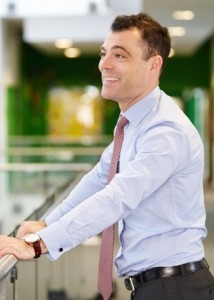 David brought a detailed knowledge of the opportunities and challenges that come with a start-up to his new role at KAA.

Prior to Ark Academy, David worked at Burlington Danes Academy, where he helped improve results from 35% 5 A*-C at GCSE (including English and maths) in the year he joined to 70% in the year he left, making it one of the fastest improving academies in the country.

David graduated from St. John’s College, Cambridge in 2003. He worked for a year as a management consultant before joining education via the Teach First scheme.

David has co-authored a book about the leadership and management of teaching & learning and assessment. In 2017 he was named by TES as one of the 10 most influential people in education that year and he has also be recognised as a “key change-maker in London” by the Evening Standard in 2018.