In September 2019 Brighton Aldridge Community Academy launched an exciting new programme in partnership with Brighton Table Tennis Club (BTTC). The club was founded on the strong belief that table tennis can be used as a powerful tool in engaging people of all ages and transforming lives. Founded in 2007, the club now runs 100 tables across the city of Brighton with more than 1,500 people playing in the weekly sessions.

The partnership between BTTC and BACA College gives students access to top class coaching and coach training, as well as the highest level of pastoral care and opportunities from both the Table Tennis Club and the college. 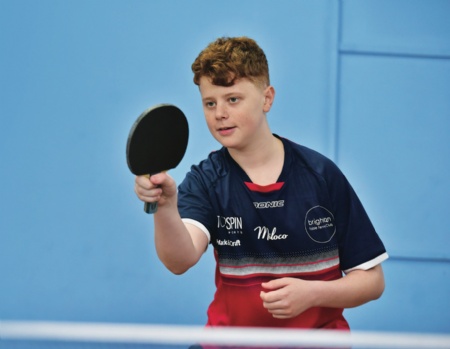 Owen Brown, Year 12, joined the BTTC Programme in September 2019 and is a top Sussex junior representing the County first team again this year. He is the Under 19 schools champion in East Sussex and was due to go to the National schools before all sports events were cancelled due to COVID-19. Owen, ranked in the top 50 in the country, says that a highlight for this year has been reaching his first semi final of a 4 star in the Plymouth Junior 4 Star, where he played superbly and attended a training camp at the venue with BTTC.

Owen has also recently completed his Level 1 Coaching qualification and has been putting his skills to the test by coaching young juniors at one of BTTC’s outreach clubs in Hangleton and has also represented BTTC in the Brighton premier league for the first time this year, with his team finishing up on top! Once lockdown is over, Owen will continue to develop his coaching skills with the chance to work with primary school children, adults with learning disabilities, in care homes and many more diverse and interesting places.

Since the COVID-19 lockdown started, BTTC have been getting creative to find new ways to enjoy table tennis and keep in touch with the community whilst at home. They have run over 15 online sessions a week to keep in touch with club members and Owen has been a huge part of this. He has regularly run the Bat and Ball skills on the BTTC’s daily show (now on show number 75!) and attending fitness sessions run by head coach Pedro Santos 3 times a week.

Speaking about BTTC’s programme of activities throughout lockdown, Owen says :

I really enjoy the live sessions and it has helped me keep my fitness and practice up. It has been good to keep in touch with everyone at the club and I have had some good advice on practices to use on my robot and table at home. It has been amazing to meet so many top players on the daily show and ask questions and listen to their stories of how they got to the top.

BTTC have been fortunate to have some amazing special guests on the show including Paralympians Will Bayley and David Weatherill and top international players and coaches including England number 1 woman Tin Tin Ho and England number 2 Paul Drinkhall and head coach from the University of Nottingham Kelly Sibley. Talking about Owen’s contribution, Teresa Bennett - Head of Development at BTTC said

“Owen has been a complete star in these programmes, always asking really poignant questions to our guests. It has also been wonderful to see BACA Year 11 students, Lucas B and Jacob A, also get involved. Lucas often comes on the BTTC daily show and has been co-host on one occasion, as has Jacob on the BTTC radio show. It was lovely that Mr Speight could pop on the show and see DJ Jacob in action!”

BTTC is a centre of sporting excellence, with three teams in the Senior British League, twelve teams in the Brighton League and many Junior teams playing in various competitions. For players that are keen to train and compete at the highest level, BTTC tailor a bespoke training program which includes access to practice with their Junior Elite and Senior British League teams.