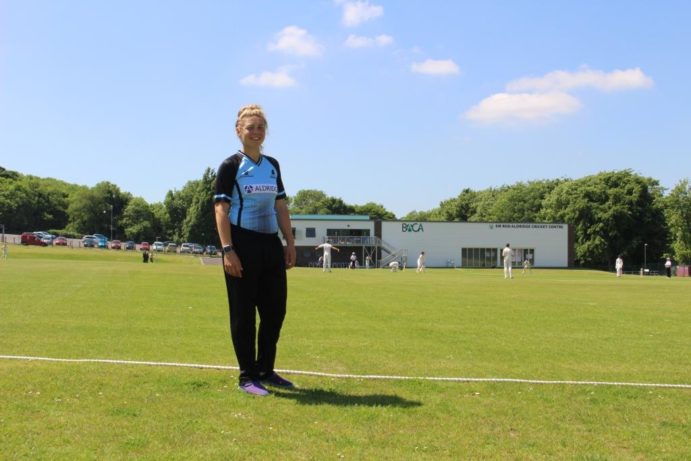 Playing sport at the highest level requires skill, talent but most of all determination. The story of Tara Norris illustrates how determination can take a young person to the next level.

Tara Norris is a 19-year-old on a mission. She wants to play cricket for England and nothing will stand in her way.

To travel the world and play the sport I love for my country is the only career for me.

Having grown up in Spain, Tara arrived in the UK as an eight-year-old who hadn’t even seen cricket on TV let alone picked up a bat – but a chance coaching session at primary school led to an instant affinity with the game. Eight years later, Tara was playing for her club, representing her county and was eventually offered a place in the England Academy.

Her natural abilities gave her an advantage, but realising her ambitions was going to take determination and an environment to thrive in. When she discovered that through the Aldridge Foundation’s work, Portslade Aldridge Community Academy (PACA) would soon have access to the Sir Rod Aldridge Cricket Centre, (a £1.8m specialist centre for the game with a particular focus on women’s cricket) she didn’t think twice about where to undertake her sixth-form education.

Since spending time at the Sir Rod Aldridge Cricket Centre, Tara has seen her cricket experience and career rapidly develop. A fundraising campaign by the students and teachers raised nearly £50,000 to enable the Aldridge Cricket Academy to go on a winter tour to Cape Town. Playing as a combined boys and girls team, they beat all bar one school and club side they came up against, experiencing a new culture and adapting to new sporting conditions.

A few weeks prior to this she toured South Africa with the England Academy (squeezing in school work in between) and winning games along the way. The following summer Tara balanced her studies with cricket, keeping her place in the England Academy squad, and training hard at the Aldridge Cricket Centre to improve her strength and conditioning.

A spell in Australia playing for Prahran CC, and winning the T20 Victoria Women’s Premier League Grand Final followed. She won player of the match for her 3/22, including the prize wickets of Meg and Anna Lanning (two of the world’s best female cricketers). Back in the UK, she undertook her coaching badges and is now honing the cricketing skills of the Sussex under-12 girls – taking her experience and empowering many more young people.

Having finished her exams, Tara is heading to Loughborough University to study for sport qualifications and, most importantly, to be close to the England and Wales Cricket Board National Performance Centre. She is unequivocal about the difference that PACA and the Sir Rod Aldridge Cricket Centre has made to her life:

There is nowhere else like this and training here has made me fitter and stronger. I would not be in the position I am today without this opportunity.